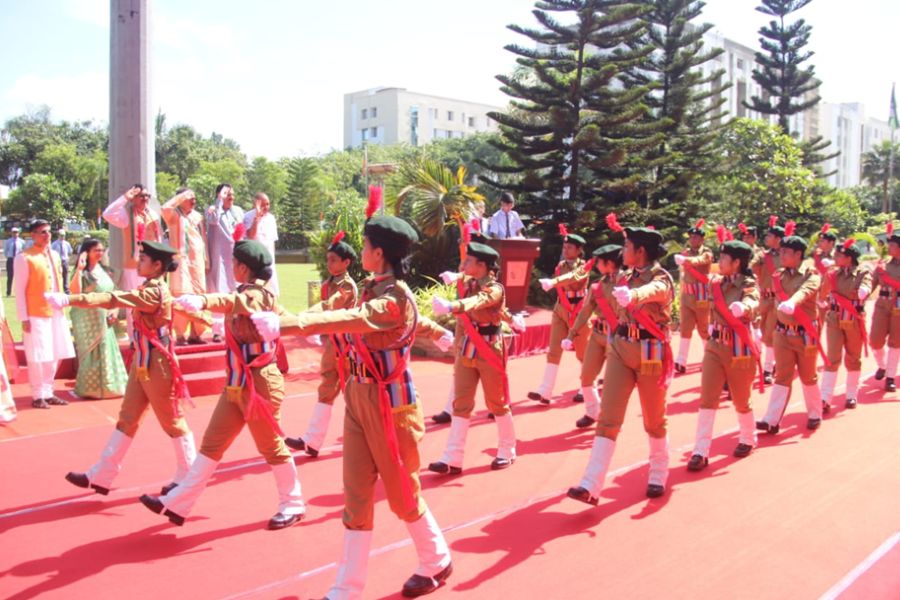 August 17: As part of its grand celebrations to mark 75 years of India’s independence under the patronage of Azadi Ka Amrit Mahotsav, Royal Global School and Royal Global University, Guwahati celebrated the 76th Independence Day of the nation on 15 August 2022.

As part of the occasion, Prabhat Pheri was organized starting at 0600 hrs which the Chief Administrative Officer flagged off. It included the staff members of RGS and RGU along with a long cavalcade of buses and other vehicles that moved around the city, and eatables were distributed to the morning walkers at prominent points en route to share the joy with them.

This was followed by a Tiranga hoisting ceremony by the esteemed dignitary. The school contingent offered the guard of honour to the Tiranga and marched past our National flag.

Our students dressed up as freedom fighters and performed their roles perfectly through their declamations. The melodious song and the colourful dance performance by the students infused a patriotic zeal in the audience.

In her welcome address, the Head of School Ms Anubha Goyal, urged the students to imbibe the spirit of Patriotism into every aspect of their lives. This was followed by a stellar speech by the Vice Chancellor of Royal Global University, Prof. Dr. S.P.Singh, who stressed the need to teach human values in our midst and incorporate it with modernity so that we emerge as responsible and empathetic citizens of this country.

The highlight of the program was a One Act Play, through which one got to trace the inception and evolution of the Indian Flag.

The program concluded on a high note of happiness and gratitude when the pilots and helpers of the school buses were honoured with a standing ovation for having carried out a Prabhat Ferry across the city earlier in the morning. Finally, the little angels of the school rounded up the event with a resplendent train ride replete with the promise of upholding the nation’s integrity and honour.