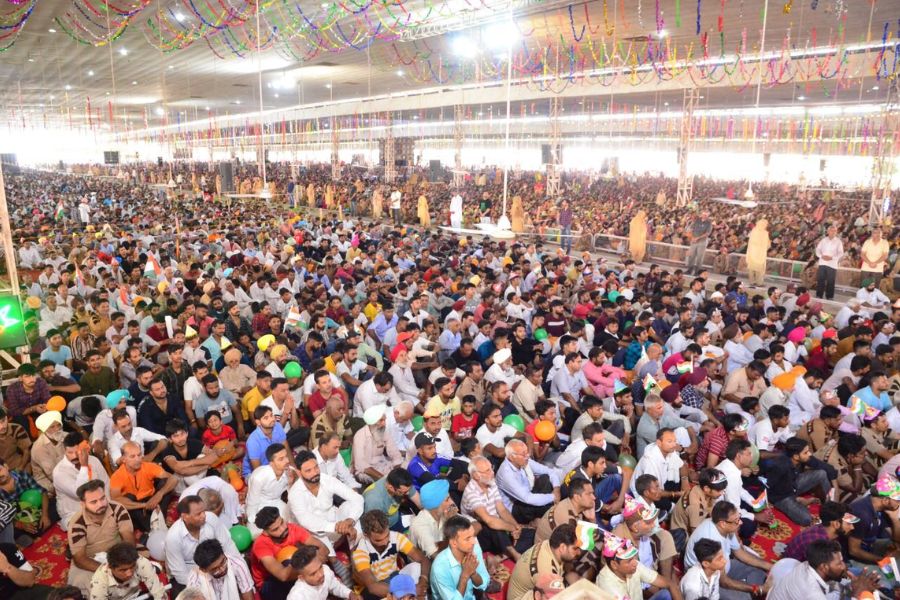 Dera Sacha Sauda witnessed a sea of devotion beyond measure, Holy Bhandara celebrations painted in the colours of patriotism

On this occasion, the entire Shah Satnam Ji Dham Ashram could be seen immersed in colours of patriotism, with thousands waving the Indian Tricolor with pride. At the same time, thousands tuned in online to become a part of this grand spectacle. The Bhandara gave impetus to the 142 humanitarian works being carried out under the guidance of revered Guru Ji.

As is the tradition at DSS, the festivities began with a welfare work—’ Feeding all creatures’, under which fodder for thousands of cows was provided to the local cowsheds. This selfless exercise aimed to ensure that they remain healthy and are fed nutritious food.

The Monday’s spiritual congregation (Naamcharcha) witnessed the unique blend of spirituality and patriotism. Lakhs of Tricolour flags were being waved as 155 families in need were provided free rations.

The humanitarian welfare works didn’t end there. 15 elderly were provided rations under the ‘Service to the orphaned parents” campaign, while 15 poor children were given free treatments and nutritious ration kits, fruits, etc.

At the same time, following the call by Revered  Guru Ji in his 11th spiritual letter, the followers paid their homage to the freedom fighters and the brave soldiers. They laid down their lives for the country’s independence by installing the national flag, the  Tricolor, in their homes, vehicles and establishments. Revered Guru Ji was born at  Sri Gurusar Modia, Sri Ganganagar (Rajasthan), on  August 15, 1967. On the auspicious occasion of The Holy Incarnation Day, the followers of Dera Sacha Sauda saw unparalleled reverence, faith and amazing zeal and passion.

The followers started coming in  Shah Satnam Ji Dham and Shah Mastana Ji Dham unabated. At 11 am on August 15, the entire pandal was full of followers even before the start of the namcharcha of the holy Bhandara. As far as one could see,  vehicles were heading toward the ashram from all directions. Long queues of vehicles were seen for several kilometres on the routes.

On this auspicious occasion, devotees of Dera Sacha Sauda reached the namcharcha pandal dancing to the tune of their traditional instruments in their traditional costumes and expressing their joy by congratulating each other. The namcharcha of the holy Bhandara began with a message of gratitude to Revered Guru ji Saint Dr Gurmeet Ram Rahim Singh Ji Insan as the holy slogan of ‘Dhan-Dhan Satguru Tera Hi Aasra’.

After this, the Kavirajs ( lead singers) sang in praise of the Guru through various devotional bhajans. After that, the pious words of Revered Guru Ji were played, which the followers listened to with rapt attention. On this occasion, Revered Guru Ji said that Satsang (spiritual congregation), Seva (service), and Sumiran ( meditation) are three things that are very important for the soul.

When a person becomes egotistic and arrogant, the person lags not only in worldly matters but spiritually as well. When he attends a spiritual congregation, he gets enlightened about what should be done and what he must avoid doing. During the namcharcha, a documentary showing the favours done by Pujya Guru Ji to humanity was also played. The 11th  spiritual letter of Revered  Guru Ji was read out to the followers. At the end of the namcharcha, the lakhs of attendees were fed langar-prasad in a few minutes.